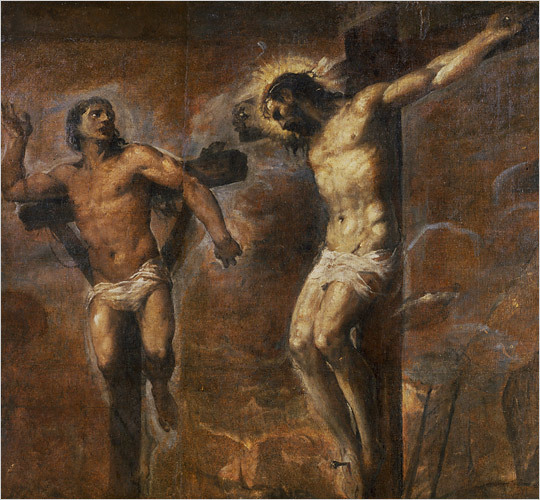 26 As the soldiers led him away, they seized Simon from Cyrene, who was on his way in from the country, and put the cross on him and made him carry it behind Jesus. 27 A large number of people followed him, including women who mourned and wailed for him. 28 Jesus turned and said to them, “Daughters of Jerusalem, do not weep for me; weep for yourselves and for your children. 29 For the time will come when you will say, ‘Blessed are the childless women, the wombs that never bore and the breasts that never nursed!’ 30 Then

31 For if people do these things when the tree is green, what will happen when it is dry?”

32 Two other men, both criminals, were also led out with him to be executed.33 When they came to the place called the Skull, they crucified him there, along with the criminals—one on his right, the other on his left. 34 Jesus said, “Father,forgive them, for they do not know what they are doing.” And they divided up his clothes by casting lots.

35 The people stood watching, and the rulers even sneered at him. They said, “He saved others; let him save himself if he is God’s Messiah, the Chosen One.”

36 The soldiers also came up and mocked him. They offered him wine vinegar37 and said, “If you are the king of the Jews, save yourself.”

38 There was a written notice above him, which read: this is the king of the jews.

39 One of the criminals who hung there hurled insults at him: “Aren’t you the Messiah? Save yourself and us!”

40 But the other criminal rebuked him. “Don’t you fear God,” he said, “since you are under the same sentence? 41 We are punished justly, for we are getting what our deeds deserve. But this man has done nothing wrong.”

42 Then he said, “Jesus, remember me when you come into your kingdom.”

43 Jesus answered him, “Truly I tell you, today you will be with me in paradise.”

Jesus continues to amaze us. Even in the midst of the most difficult and awful moments of life he is extending grace to others.

Take for example, his offer of paradise to one of those crucified with him on that Friday afternoon.

Up to this point Jesush as not slept for more than 36 or more hours. He has been abused and assaulted. He was too weak to carry his cross all the way to the hill (Luke 23:26). He is close to death. He is hanging in agony, gasping for breath and life.

From the Gospel of Mark we learn that both criminals were hurling insults at him: "Those crucified with him also heaped insults on him" (Mark 15:32b).

So the one who makes the request “Jesus, remember me when you come into your kingdom” had also been heaping insults on Jesus.

And then something in the criminal's demeanor and tone changed. Why? We are not sure. Maybe he realized that the One he was insulting did not deserve the insults. Maybe he experienced that Jesus did not insult him back.

Whatever the case he is not asking for Jesus to "remember" him.

Instead of all of these natural (at natural to us) responses Jesus says and promise: “Truly I tell you, today you will be with me in paradise.”

Do you need to hear gracious Jesus say those words to you today? Or do you need Jesus to respond to you in grace and mercy as he did toward the criminal on the cross?

If you do, know this: Jesus always responds with grace to the needy.

Amazing love, how can it be, that my King would die for me!