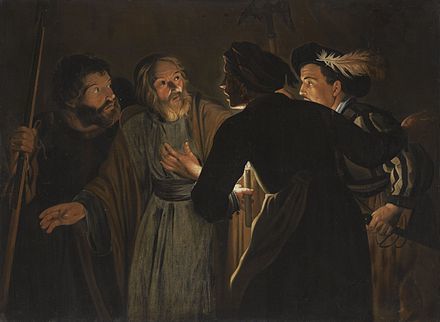 54 Then seizing him, they led him away and took him into the house of the high priest. Peter followed at a distance. 55 And when some there had kindled a fire in the middle of the courtyard and had sat down together, Peter sat down with them. 56 A servant girl saw him seated there in the firelight. She looked closely at him and said, “This man was with him.”

58 A little later someone else saw him and said, “You also are one of them.”

59 About an hour later another asserted, “Certainly this fellow was with him, for he is a Galilean.”

60 Peter replied, “Man, I don’t know what you’re talking about!” Just as he was speaking, the rooster crowed. 61 The Lord turned and looked straight at Peter. Then Peter remembered the word the Lord had spoken to him: “Before the rooster crows today, you will disown me three times.”62 And he went outside and wept bitterly.

Peter is quick to speak, quick to say something, quick to put his foot in his mouth.

Just a mere 21 verses before this passage Peter said to Jesus: "Lord, I am ready to go with you to prison and to death.” (Luke 22:33). Those are amazing words and seem to show incredible faith, support and courage.

But all of that faith, support and courage fades away into darkness and thin air when three strangers simply (and correctly) connect Peter with Jesus: “This man was with him” (Luke 22:56).

Then I look at my own life and see the same pattern. I especially see it as I weekly move from Sunday to Monday. On Sunday I am so full of faith in Jesus. On Monday I am so ready not to believe, to not acknowledge that I even know the Jesus I was just singing about and singing to the day before.

If you sense this same kind of experience in your own soul, let's hear Jesus gracious prayer for Peter and for us: "But I have prayed for you, [fill in your own name], that your faith may not fail. And when you have turned back, strengthen your brothers.” (Luke 22:32).

The amazing grace of Jesus even in the certain knowledge of his friend's denial. May we know that same grace in our lives.