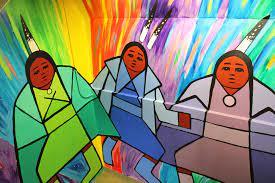 ONE YEAR ANNIVERSARY OF DISCOVERY OF UNMARKED GRAVES

It has been one year since the Canadian public gained widespread awareness of 215 unmarked graves near the former Kamloops Residential School due to the efforts of the Tk’emlúps te Secwe̓pemc.  This led to many more unmarked graves being uncovered at many more former residential school sites. It was well-known to survivors and their families that some children did not make it home and the accounting for and recovery of unmarked remains make up Calls to Action 71-76 of the Truth and Reconciliation Commission’s 94 Calls to Action.

We pray for the continued accountability from government policies and agencies and for continued healing and restoration for survivors and families. Lord, continue to guide this active reconciliation journey and give us the continued desire for truth, humility and the will to see profound changes and reparations lead to a good future for Indigenous and non-Indigenous peoples in Canada.

Originally published on June 2, 2021, by the Christian Reformed Centre for Public Dialogue and the Office of Social Justice. It has been slightly updated for today's reality.