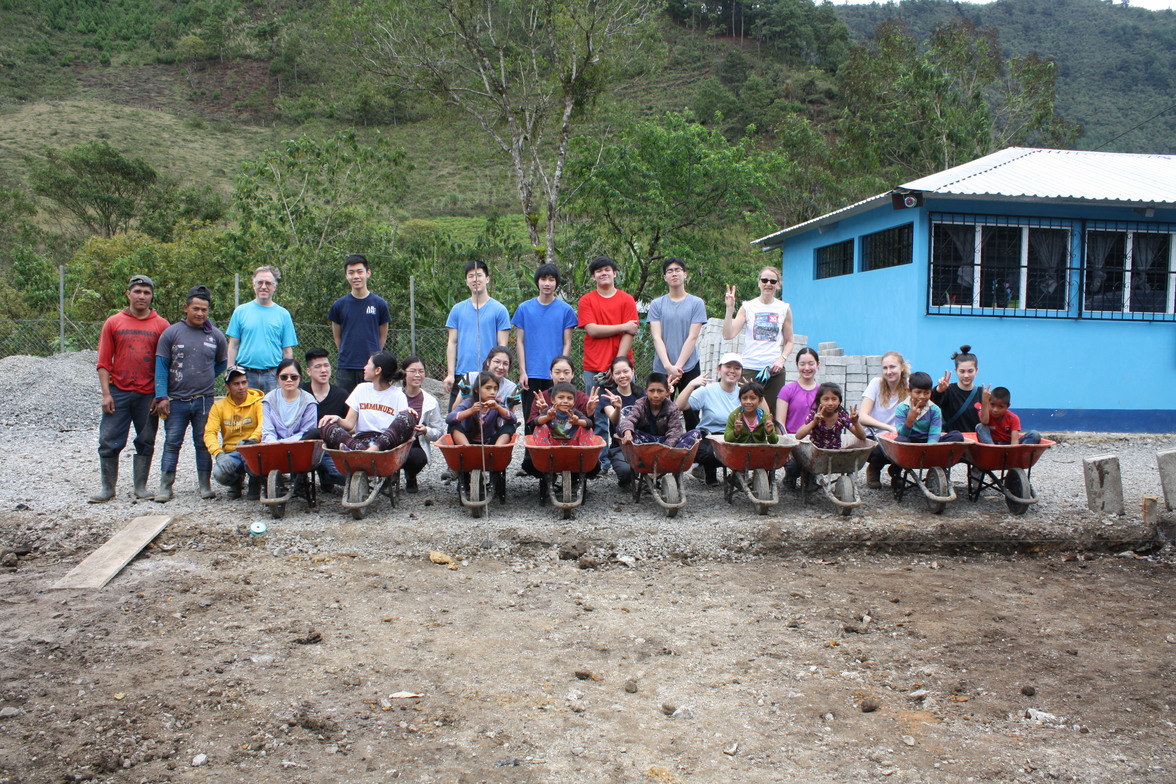 Having recently returned from our mission trip to Guatemala, we could see the hand of God directing it all along the way. Our team, consisting of 13 grade 11 students from John Knox and 5 chaperones/leaders, had been all set to go to Asia, but the lockdown of the country we were going to go to caused us to look elsewhere. After much prayer and meeting people at Missionsfest, we were led to Impact Ministries which were ready to take our team on short notice to serve in Guatemala. Then, when one of the teachers at JK heard we were going to Guatemala, she wanted to come along, which was a welcome addition since she was fluent in Spanish.

We went to a town called Tactic, which was situated in the lush rain-forested highlands of Guatemala. The weather was misty and spring-like, which was perfect for when we were working outside on a construction project to help build one of the most recent schools of Impact Ministries. We laboured alongside some of the kids that go to the school and some local hired men.

Later that day, we visited the orphanage on the Impact Ministries property and heard the stories of the six babies that are currently living there. In the words of one of our team leaders: "Holding those babies was a highlight for many on the team.  The social worker and the nannies in the orphanage have all been students in the Impact Christian schools and are now employed by Impact. Their love for Jesus and their devotion to serving the community is evident as the stories were shared. The first baby to come to Impact, for example, was rescued out of the bottom of an outhouse with the umbilical cord and placenta still attached. The social worker described this as similar to how we have all been rescued by God out of the muck and how much God loves each of us just like that little baby boy."

Another highlight for the team was visiting the various Impact Ministries schools and joining them for their exuberant worship and devotion time, as well as teaching them some crafts and games. The children love to hug and gave our team many hugs. We heard the stories of some of the principals and teachers, many of whom had attended the Impact schools as students, and then returned to teach in the schools.

Here is one of the school visits as described by one of our team leaders: "This morning, we joined one of the local schools for their hour-long daily devotional. They mentioned during one of the song breaks, a recent spiritual retreat for the children. These kids are Pre-K through grade 5. Yes, they had a spiritual retreat and goodness we could see and feel their passionate worship. Their hands raised in the air in surrender to God. Their voices, singing louder than the musicians on the microphones. Kindergarten children kneeling with their hands lifted to heaven. Most of us were truly and deeply touched when a class came to pray for US. Yes, they were praying FOR US. With joyous and humble hearts they hugged us tight as they prayed for us.

Once the praise and worship finished, we were glad to share a song with the children and to introduce ourselves to them. We then, waited outside the gathering room in a line for a hug from each student. Then, the principal of the school shared information about the school and the situations in which these children live, how they get to school, and their struggle. We had the opportunity to meet a teacher that had attended and graduated from the first class of students from Impact Ministries. Her story and her heart moved us, and most of us were in tears. There were a lot of questions about how was it possible to teach the kids to praise God in such a passionate and joyful way. Their answers were that they tried to set a good example and they just encouraged the kids to praise God from their heart. They said it takes some time for them to get comfortable, but then it’s contagious." One of the goals of Impact Ministries is to grow godly leaders, and we could see that those goals were being reached.  The Impact Ministries mission statement is:

To train Guatemalans for leadership by teaching biblical principles in such a way that they become integrated in their lives and effect spiritual change in their society, and to impact North American Christians for world missions.

Our team was definitely being impacted for world missions as we not only heard about and saw God's hand upon the lives of the people involved with Impact Ministries, but also had opportunity to be a blessing ourselves to several people. We visited some of the school children's homes, which were very poor one-room wooden shacks with a dirt floor, and blessed them with some groceries and gifts and prayed for them.

On the last day our team was challenged to reflect on what God has been teaching us on this trip and to make sure that we don't just leave it behind as a single mission trip, but see it as the Holy Spirit continuing to transform our hearts to be his missionaries wherever we are.  God continued to show his hand on this trip as we made it out of Guatemala one day before the country was closed to any flights leaving.

Apr 4
The Future Is Present Tense